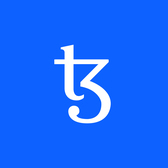 Over 200K contract calls in the first week of April, 25K clean NFTs minted, and over 1 million in TVL